Wickersley Parish Council is delighted that the Wickersley Platinum Jubilee Walkway, launched on 1st June 2022, is one of only two such Walkways curated to mark the 70 year reign of Queen Elizabeth 11. (The second Walkway is in Birmingham)

The Platinum Jubilee Walkway is 7km long (4.35 miles). The 7 kilometre length of the walk represents the 7 decades of the reign of Queen Elizabeth 11. The circular route, starting and finishing at Winthrop Gardens, takes in many of the key landmarks in Wickersley and is a great way to learn more about the village of Wickersley. This walk will take about two hours.

There is a shorter - Heart of the Village - walk of 3.7km / 2.3 miles which takes about an hour and is more suitable for those with pushchairs or mobility issues. 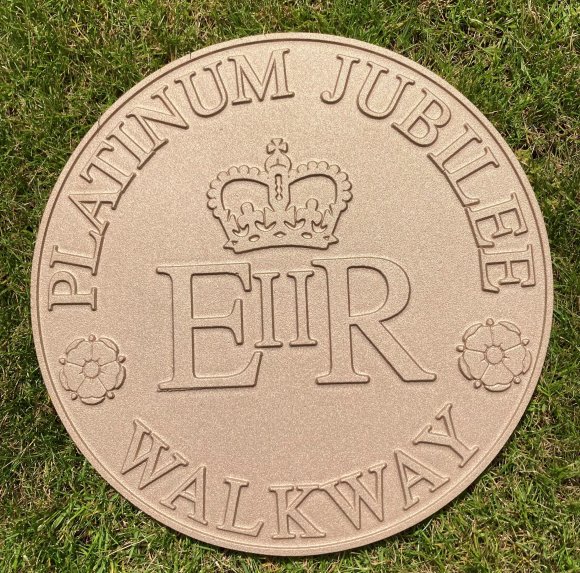 The Bronze plaque, located at Winthrop Gardens, marks the start of the Wickersley Platinum Jubilee Walkway.

Note the 'royal cypher' on the plaque - the monogram of Queen Elizabeth 11 which signifies the 'royal' status of this walk.

As part of Winthrop's plans to mark the Platinum Jubilee, Winthrop Organiser, Anna Chester, asked Winthrop Wednesday Walk Leader, Elizabeth Harwood to come up with an idea for a suitable walk for Wednesday 1st June. Elizabeth did some research and came across the Commonwealth Walkway Trust who curated the Queen's Walkway in Windsor to mark the point when Queen Elizabeth 11 had been on the throne longer than Queen Victoria, thus becoming the UK's longest reigning monarch. This walk in is 6.3km (63 yrs on throne at the time) with 63 points of interest along the walk. On the premise that what's good enough for Windsor is good enough for Wickersley, Winthrop Organiser, Anna Chester sent a speculative email to the Commonwealth Walkways Trust!

We were all surprised and delighted to receive a very encouraging response from Chief Executive, Jim Walker within 24 hours of our email. Jim was extremely helpful in advising of key elements which a walk would need to address in order to be acceptable as a recognised 'Walkway'. Safety, Accessible and Welcome were the key things he would look for. This immediately gave us the confidence to do some serious planning work and this small project group – Elizabeth, Anna and Glenna Briggs curated a walk around Wickersley of 7 km picking up key Wickersley landmarks.

An invited group of 70 walkers, one for each year of the Queen's reign, reflecting the richness and diversity of the Winthrop and Wickersley communities launched the walk on Wednesday 1st June 2022 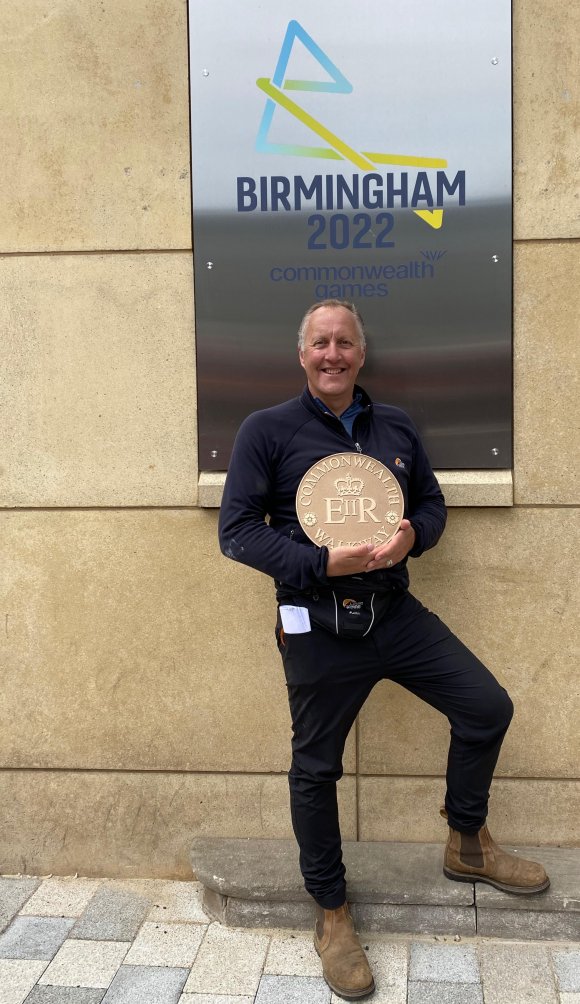 Said Jim Walker, Chief Executive of the Commonwealth Walkways Trust after his visit to Wickersley to 'Walk the Walk' and endorse the work done locally in curating the walk

"The walk around Wickersley provides a wonderful insight into Yorkshire village life. Threading together the places where locals, for centuries, have farmed, quarried, worshiped and socialised, the heart of Wickersley benefits from a belt of accessible woodlands and open fields with far reaching views to the Peak District.

But the Jewel in the Crown, that makes this particular village walk so distinctive and compelling, is the one- acre of tranquility at Winthrop Community Gardens where there is a warm welcome for every visitor. People have long known about the mental and physical health benefits of going for a walk but somehow the benefits go deeper and last longer after an amble around the Wickersley Platinum Jubilee Walkway - as long as there's a moment to sit and enjoy a cuppa down at Winthrop." 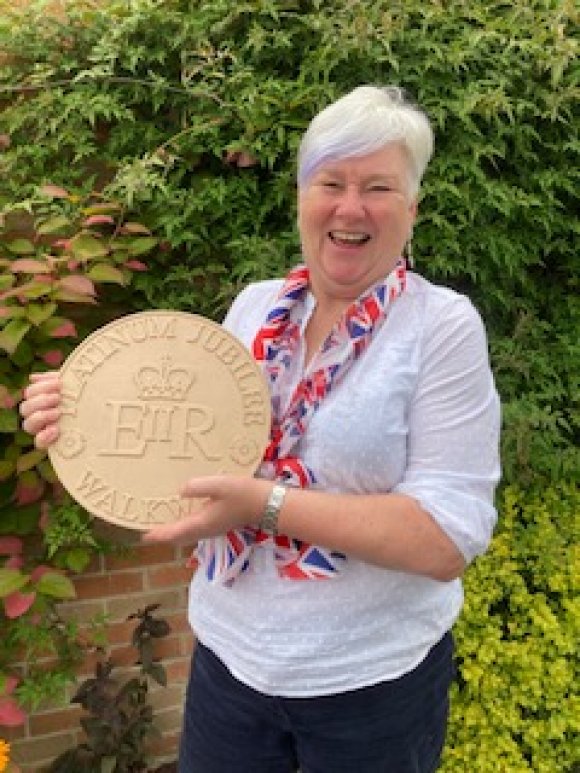 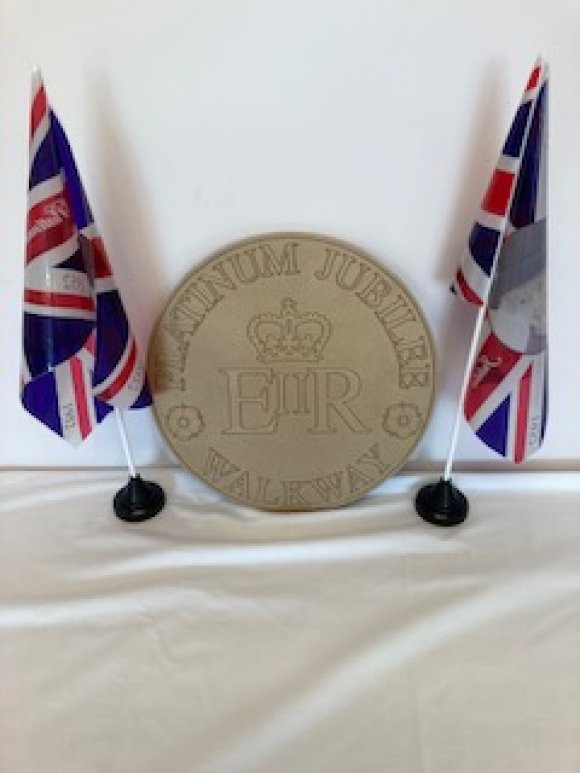 The route of the Wickersley Platinum Jubilee Walkway 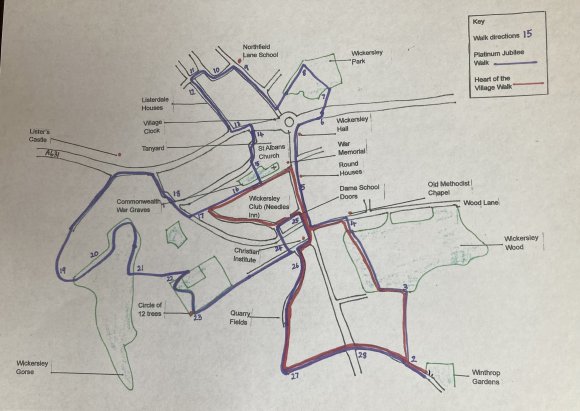 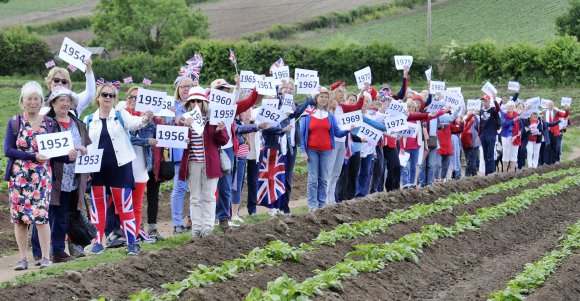 Points of interest on The Wickersley Platinum Jubilee Walkway

Wickersley Platinum Jubilee Walkway - more information about Points of Interest along the route - click on the links to find out even more!

Wickersley Woods - An area of ancient woodland mentioned in the Domesday Book. Mainly Beech and Sisal Oak trees with a rare area of Acid Grassland in the centre. There are eight wooden chainsaw sculptures in the wood which has been managed by Wickersley Parish Council since 1978.

Christian Institute - Opened in 1862 by Dr W.Holt Yates. "It's purpose was the diffusion of general and useful knowledge,thereby to increase the respectability,happiness and welfare of society ". This modern 'social' church was never consecrated for worship.

Wickersley Social Club - This building was formally 'The Needles Coaching Inn on the main(toll) road between Rotherham and Bawtry. It later became a farm and in 1928 reopened as a Working Men's Club

Round Houses - 35,37 Morthen Road. A pair of cottages re-fronted in the early 19th.Century. Number 35 was for a time used as a Methodist Chapel and Number 37 was once Styrings sweetshop.

War Memorial - Erected in 1920 to the fallen of two world wars. It contains 43 names, 28 from the First World War.

Wickersley Park - A well maintained public park, managed by Wickersley Parish Council, where significant investment has been made to upgrade the children's play area and other facilities.

Northfield Lane Primary School - The school was opened in 1967 in response to an increasing Wickersley population.When the infant and junior schools were amalgamated in 2003, grant funding paid for the iconic blue boat buildings.

Wickersley Village Clock - The clock was completed in 1995 and a time capsule buried beneath it. It was presented to the people by the Wickersley Agricultural Show Society and Wickersley Parish Council.

The Tanyard - The primary shopping area of Wickersley was built in the 1960's on the site of a farm that once stood there.

St Albans Church and Tower- Wickersley's Parish Church is dedicated to St Alban and is one of the oldest buildings in the village. The church hall was originally a barn circa 1800 for the former rectory building.

Lister's Castle - In 1921 Joe Lister built his family a grand house on a plot of land overlooking Dene's Plantation. It is known locally as 'Lister's' Castle due to it's ornate and crenellated design.

Wickersley Gorse and Common Bank - In 1987 Wickersley Parish Council bought the eight hectares of ancient woodland,grassland and scrubland and have managed it ever since and allow public access.

Circle of trees - In 1993 the Parish Council planted a circle of 12 trees at the western edge of the Bob Mason recreational ground. This was to mark the establishment of the EU with it's twelve original members.

Dame School Doors - The doors date to the 19th century and it is believed that the school run by a working class woman had one door for her to enter and a small door for the children. Once a child grew too tall to enter they were deemed ready to work.

Quarry fields - In the 18th century Wickersley stone was found to make excellent fine grained grindstones for which there was great demand. By 1800, 5000 stones a year were sent to Sheffield Cutlers and exported abroad. In 1871 Directory listed 28 quarry owners but only 50 years later the cutlers abandoned the use of natural stone and the quarries were closed. This industry was hugely important to Wickersley and was a major contributor to its economic and social development.

Download a copy of the 'Points of Interest' here

The 70 walkers in their decades, pausing at the Storyteller's Chair in Wickersley Wood 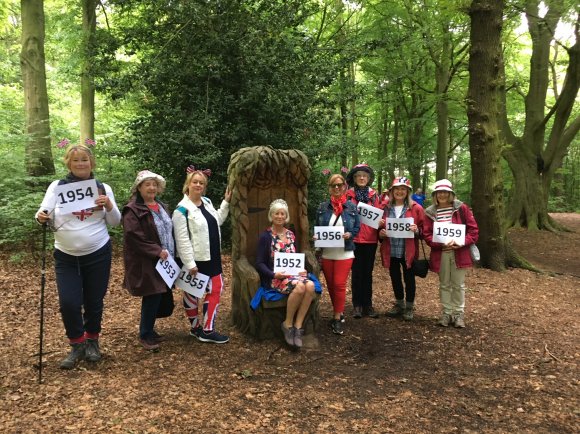 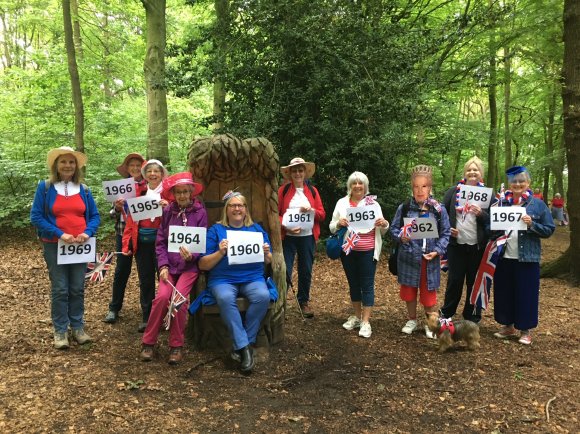 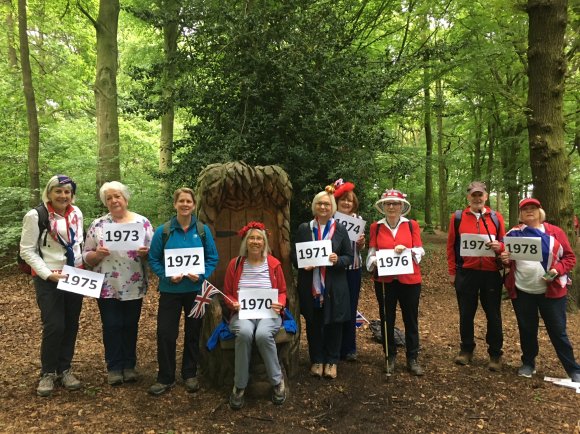 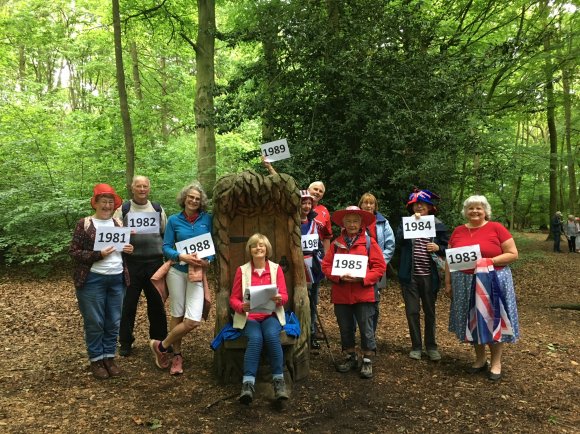 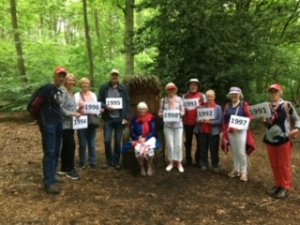 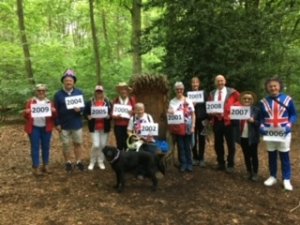 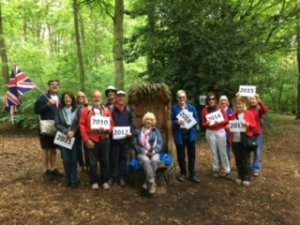 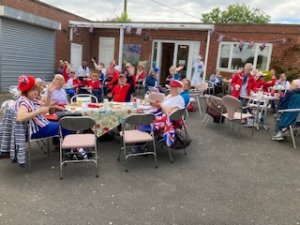 This Platinum Jubilee Walkway has been curated by Winthrop Gardens volunteers, principally Elizabeth Harwood with the support of Anna Chester and Glenna Briggs.

We are hugely appreciative of the support and encouragement we received from Jim Ward, Chief Executive of the Commonwealth Walkways Trust